If you just can’t muster the energy or motivation to finish all of your daily duties, then you might benefit from a dose of white kratom. Elevating, uplifting, and electrifying, white kratom strains deliver an extra portion of zest and grit to help you power through the most demanding of responsibilities.

Across the entire landscape of white vein kratom choices, some tend to stand out. White Maeng Da and white Thai both receive significant praise from the ever-selective consumer base. But what exactly sets them apart? Find out here.

Many of the kratom products you’ll find on the market come from what we call landraces. These are organic varieties that naturally exist in the wild with or without human intervention. Cultivars on the other hand pertain to strains that exist only because of human effort.

Maeng Da is perhaps the only true kratom cultivar we presently know of. The strain came about over a decade ago when Southeast Asian farmers convened and made it their goal to produce the strongest kratom strain on the planet.

They did this by grafting together different varieties of kratom. The mature plant was promptly called ‘Maeng Da’, which in English translates to ‘pimp grade.’

Today, Maeng Da is recognized as one of the strongest strains on the kratom scene. Usually reserved for those with slightly more experience with kratom, Maeng Da’s effects can easily overpower neophyte enthusiasts.

By virtue, white kratom strains deliver a powerful dose of energy and zest that may affect the body, mind, or both. In the case of white Maeng Da, effects more strongly manifest in physical aspects including strength and energy. 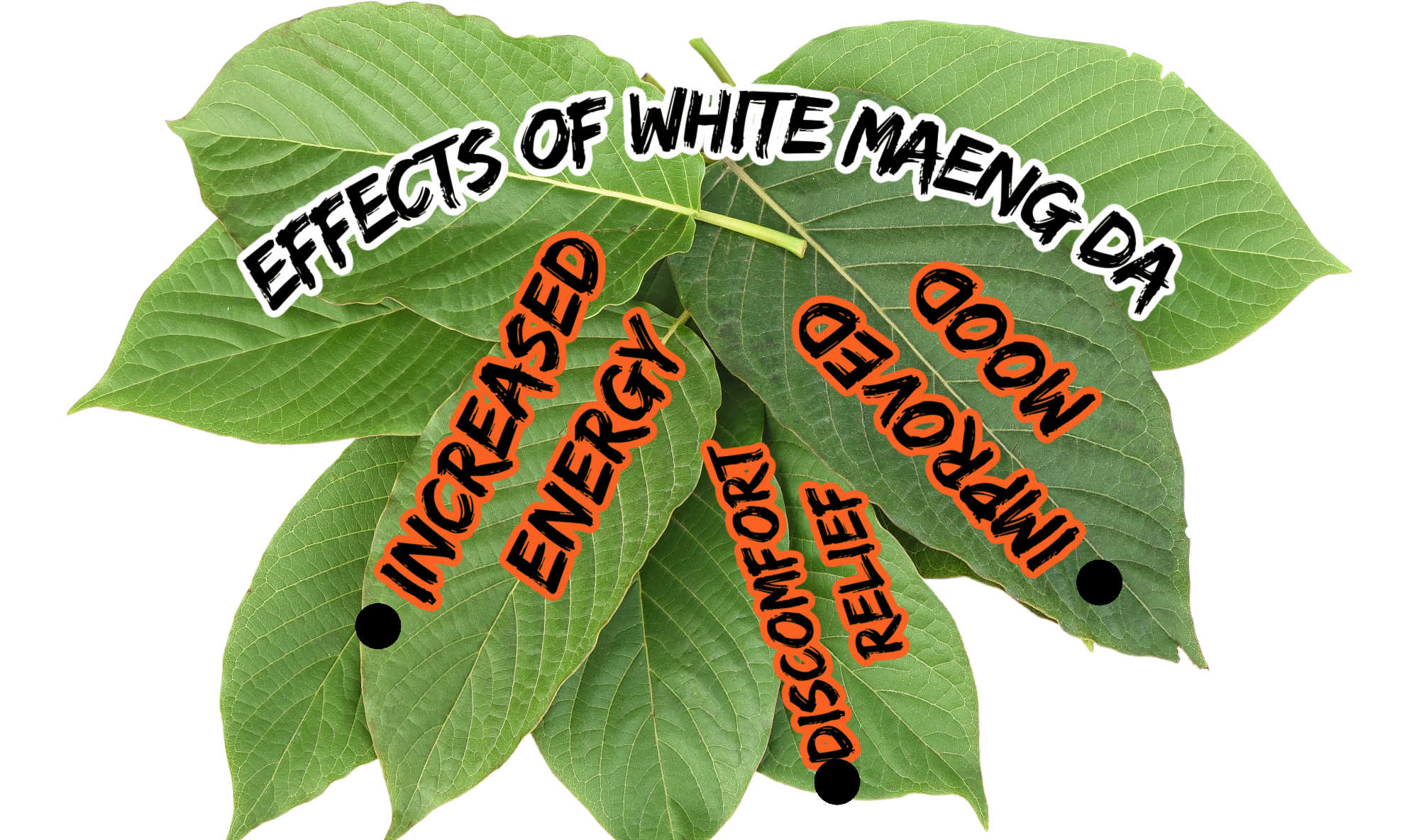 Before you toss and wash, however, it helps to remember that not everyone has the same response to kratom. So although you might be more likely to experience the benefits listed here, it’s still possible to encounter completely different effects.

What is Thai Kratom?

Unlike Maeng Da which was the result of human intervention, Thai kratom boasts all-natural origins. The strain is native to Thailand (as the name suggests) but up until recently, most of the Thai kratom supply shipped to the US actually came from Indonesia.

In the mid-1900s, kratom was outlawed in all of Thailand. This forced kratom farmers to take samples of the variety to cultivate it elsewhere so as to sustain its existence.

In 2021 however, almost half a century since the ban, Thailand lifted restrictions on Thai kratom, allowing local farmers to take their slice of the kratom market.

Clear and collected, the effects of white Thai kratom mainly impact cognition. As the strain’s alkaloids rush through your system, you’re likely to feel an elevated sense of mental stimulation that urges productivity and creativity.

Another equally powerful white vein variety, white Thai awakens the user and inspires cognitive stimulation. The strain works wonders to invigorate a sense of motivation and creativity that definitely helps with work and responsibilities.

Again though, it’s possible that your encounter with white Thai won’t work out the same way that others have described. Always consider your own tolerance and body chemistry when considering your expectations of a kratom strain’s possible effects.

To understand why strains exist, you’re going to have to consider the various elements that kratom plants need in order to thrive. Things like sun, water, and soil all contribute to the healthy growth of a kratom plant.

Now, think about conditions across all of the areas where kratom is cultivated and farmed. Obviously, sun and rain patterns and soil quality probably won’t be the same across the board.

And because these elements contribute to a strain’s growth, you can expect variations in kratom alkaloid expression depending on what elements they were exposed to as they grew.

Ultimately, kratom strains are the result of fluctuations in these variables, depending on where the kratom farm is located. Another thing to consider is the age of the leaves.

Older leaves’ veins turn red just before they fall off the stalk. These produce soothing effects that calm and relax the system. Right before they reach maximum maturity, leaves tout green veins which indicate that they elicit a combination of subduing and stimulating effects.

As you might have already guessed, the youngest, freshest leaves show white veins. These samples produce solely stimulating benefits, as described in this quick comparison.