Kratom enthusiasts hoping to experience the fullness of stimulation would do well to try white Thai or white Borneo. Both leaving their users feeling stimulated and energetic, these strains awaken mind and body — but in their own distinct ways.

While the varieties aim for the same end goal, they achieve this through different means. Thus, depending on the kind of stirring experience you’re hoping to attain, it’s important that you fully understand what each choice brings to the table.

What is White Thai Kratom?

For the longest time, Thai kratom supplies that made their way to the United States were grown and cultivated on Indonesian soil. The reason? Laws and regulations, of course. Thailand outright banned kratom within its borders, so farmers had to find a way to keep the Thai kratom landrace alive. 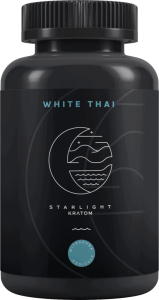 During the time that speciosa was outlawed, cultivators took Thai kratom that they grew and cultivated in Indonesia. But in 2021, Thailand lifted the ban on kratom seeing its success as an international wellness product. Thus, Thai kratom is making a strong comeback, with incoming supplies promising more authentic effects.

White Thai kratom, as you might have gleaned, is the most stimulating of all of its kinds. Energetic and touting a pair of long, long legs, white Thai makes the ideal companion for difficult days at work that requires loads of office tasks.

The white Thai brand of stimulation mostly takes place in the mind. The stimulating effects awaken cognition and inspire a brand new sense of productivity and motivation. That’s why most of those who enjoy white Thai claim the strain as the ultimate efficiency buddy.

All of that said, it’s important to highlight the fact that kratom strains change effects from person to person. So many variables contribute to the experience, and it’s near impossible to avoid changes to these factors. But even then, here are some effects you’re more likely to encounter:

What is White Borneo Kratom?

The massive island of Borneo houses a diverse array of flora and fauna, with much of its land untouched by civilization and infrastructure. This natural safe-haven thus provides its rich biodiversity protection against man-made elements that could interfere with its growth.

Borneo kratom that gets shipped to the United States grows on the Indonesian area of the island. Inherently, Borneo kratom delivers balanced effects that simply bring out the best in its user.

Unlike white Thai, white Borneo offers its users a more body-centric experience. This means that much of the energy boost and stimulation will impact the body rather than the mind. This has earned white Borneo significant popularity among blue-collar workers and gym rats.

Again though, it’s important to point out that the effects vary from person to person. However, for the sake of giving you an idea of what you can expect, these effects most commonly develop after a white Borneo dose:

Consider all of the different variables that go into growing a healthy kratom plant — sunlight, water, soil. Is there any way to standardize the quality of these elements? The short answer is no. Changes in these variables result in changes in plant chemistry. And that’s why we have kratom strains.

To put it simply, kratom that grows on the Island of Borneo will be exposed to different elements versus kratom that grows in Thailand. More than that, the maturity of the leaves at harvest is equally important.

As the leaves mature, they change from stimulating to relaxing. So white vein kratom tends to be more energetic, while red vein options allow more soothing effects to shine through.