Not for the faint of heart, Trainwreck kratom already gives a warning about its effects through the label alone. This powerful kratom variety never truly follows a pattern, and thus surprises its users with each new batch.

Hard-hitting, unpredictable, and profound, Trainwreck kratom brings together a blend of your favorite varieties to help you experience the fullness and depth of kratom’s power. And if you’re new to the scene, it might be prudent to think twice before you mess around with this supreme blend.

What is Trainwreck Kratom?

Most kratom strains get their name from the place where they’re grown and harvested. So what about Trainwreck kratom? Well, this particular variety deviates from the norm. Considered a strain of its own, Trainwreck is actually a combination of three different color veins.

Vendors who offer Trainwreck are at liberty to use whatever strains they want. The main (unspoken) requirement however is that Trainwreck must include some combination of red, white, and green vein kratom strains.

The reason for blending together the different colors is because users believe it balances out the effects. If you don’t already know, color veins indicate the general experience that a specific kratom product might elicit.

White vein kratom comes from young kratom plants. These leaves are harvested way before the plant matures, which is why the veins underneath the leaves might showcase a whitish or pale color. Anecdotal evidence supports the idea that white vein kratom elicits a more energetic response.

Leave the plant to mature slightly longer, and you’ll get green vein kratom. This slightly more mature leaf touts greener veins underneath, which is how it gets its name. Although energetic and upbeat in its own right, green vein kratom tends to also deliver moderate relaxation effects. 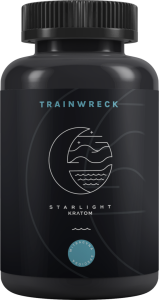 And then there’s red vein kratom. These older, fully mature leaves are harvested right before they fall off of the stalks. They produce a sedating response and find use mainly as a nighttime variety for supporting sleep and relaxation.

Benefits and Effects of Trainwreck Kratom

It’s hard enough to put a finger on the exact effects of a standard kratom strain. That’s because changes in cultivation techniques and growing conditions can result in variations in alkaloid content. This in turn may affect how each individual experiences the strain’s benefits.

Multiply that potential by three, and it’s plain to see why Trainwreck might be profoundly unpredictable. Even the slightest variations in the ratio of the three components can make one Trainwreck product entirely different from another.

But even then, those who enjoy Trainwreck have reported their experiences online. And based on information collected from those who use Trainwreck regularly, the blend may elicit specific effects more commonly than others. These include:

There’s no magic dose, no magic formula that you can use to measure the proper kratom dose for your needs. That’s because the right dose is purely subjective. That is — it relies solely on your body’s response to the product.

Whether you’re a longtime kratom user or if you’re trying it out for the first time, a trial dose isn’t something you can skip. This dose gives you a glimpse of your body’s response to the product and may help you detect potential side effects or even allergic reactions you could present when using a larger dose.

A trial dose should measure no more than 2g. After the effects wane and you feel like you’re in the clear, you can start increasing your succeeding doses to climb your way up to your therapeutic threshold.

An increase of 1g to 2g with each new dose should be the safest way to go about the process. Once you reach your therapeutic threshold, experts recommend sticking with it to avoid increasing your tolerance.

Taking too much kratom too often may cause your body to feel like small doses aren’t enough. So you’ll end up having to take more and more kratom with time. Instead, rotate your strains and take breaks every week or so to keep your tolerance low.

According to experts, a low dose of Trainwreck will elicit a more energetic, upbeat response. But if you’re hoping to wind down at the end of the day and enjoy peaceful dreamless sleep, then a slightly steeper dose may be necessary. Just remember to avoid taking too big of a dose too often.

Let’s be honest — the Trainwreck strain isn’t for everyone. Low tolerance users and kratom neophytes might find the blend’s effects to be a little more powerful than their bodies can handle. So if you like the Trainwreck blend but need a better fit for your system, here are some alternatives:

Considered the OG of all kratom strains, Maeng Da kratom delivers everything — energy, discomfort relief, calm, and a clear headspace. This dynamic variety is highly available and widespread, so you also don’t have to worry about availability. 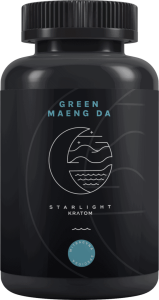 Compared to Trainwreck, however, Maeng Da tends to be slightly more extroverted and sociable. The strain also teeters more closely to one end of the spectrum or the other, since it’s not a blend of different color veins like Trainwreck is.

You can’t really beat Borneo kratom in the balance department. This variety boasts a perfectly controlled blend of effects that includes a mild energy lift and a cool, collected, and upbeat mood shift. In a lot of ways, Borneo kratom might just bring out the best in you.

What makes it different from Trainwreck is that it isn’t quite as profound. Perfect for beginners, Borneo elicits a controlled, balanced response that won’t spook first-time users with overwhelming sensations that feel out of control.

A mix of Maeng Da and Elephant kratom, Dragon is similar to Trainwreck in that it produces an unpredictable range of effects. The variety’s benefits depend wholly on its components, so it’s different every time.

Like Trainwreck, however, Dragon can be upbeat and mood-enhancing. It also carries with it some pretty solid benefits against discomfort. The main distinction though is that Dragon tends to be more of a high resonance variety with limited effects for relaxation and calm.