Hulu Kapuas Kratom is a speciosa rarity that not every kratom vendor has the privilege of selling. This hard-to-find kratom variety is supremely balanced in its effects, often said to bring out the best version of its users.

Clear, precise, and alert, Hulu Kapuas offers effects that are as rare and distinct as the strain itself. So, whether you’re feeling stuck and uninspired or if you simply want to soothe an ache that’s been begging for relief, a dose of Hulu might just do the trick.

What is Hulu Kapuas?

Hulu Kapuas — often just shortened to Hulu — grows on the island of Borneo. The Kapuas River starts at just about the geographical center of Borneo Island, and courses all the way west to the South China Sea.

Here, the lush green forests take root in particularly moist, mineral-rich soil, thanks to the proximity of the flowing currents of the Kapuas. For that reason, kratom that grows in the area possesses distinct chemistry that imbues the plant with equally unique effects.

The reason why Hulu Kapuas is so rare on the US market is that growing the variety anywhere other than the vicinity of the Kapuas dampens its effects. So, for cultivators and farmers to be able to supply Hulu to US vendors, they’d have to farm close to the river.

For obvious geographical limitations, that’s not as easily done. The challenging terrain surrounding the river, and the way that the borders between Indonesia, Malaysia, and Brunei play into the picture make it especially difficult to farm kratom in this particular region.

That said, cultivating, harvesting, and processing enough Hulu Kapuas to meet US demands just isn’t quite as simple. That’s also why only a handful of vendors manage to get their hands on any Hulu shipments, thus the relative rarity of the said variety.

Benefits and Effects of Hulu Kapuas

No two people will ever have exactly the same experience even if they take the exact same kratom from the exact same batch. That’s because numerous factors contribute to the kratom experience. This includes dosages, body chemistry, and even tolerance.

All of that said, the effects of Hulu (and every other kratom strain for that matter), aren’t set in stone. Nevertheless, there are a few specific benefits that users tend to report more often after taking a Hulu Kapuas dose. And these include:

Most of those who enjoy Hulu Kapuas claim that the variety doesn’t just clear out cognitive smoke, but also keeps the mind sharp and alert. Increasing concentration and allowing more complex mental exercise, Hulu might stimulate your creative juices to boot.

On the island of Borneo, locals would often use Hulu to soothe tired muscles at the end of a long day of work. Today, US-based kratom users leverage the variety for the exact same purpose, thanks to its targeted effects on aches and discomfort.

Introverts and wallflowers who don’t necessarily like to join social gatherings too much might find Hulu’s stimulating effects to be particularly helpful. In slightly increased doses, however, Hulu has the tendency to loosen the lips.

What’s particularly enjoyable about the increased energy that comes with a dose of Hulu is that it isn’t directionless. The purposeful vigor boost won’t have you feeling jittery for no reason, and instead imbues the body with a feeling of productivity and motivation.

A lot of people complain of side effects or no effects at all after taking a dose of kratom. But most often, it’s not the kratom’s fault. Mistakes in measuring out the proper dose can soil the entire experience. So it pays to know how much your body needs in order to enjoy the fullness of the herb’s effects.

It doesn’t matter if you’ve had your fair share of kratom in the past. Starting out a new strain can affect your body in new ways. That’s why it’s important to make sure you practice some caution so as not to overwhelm your system.

Generally, a starting dose of 1g to 2g should help acclimate your body to the new strain. This introduces the chemistry to your system and gives you the opportunity to detect potential negative reactions.

Of course, that first dose probably isn’t going to give you the results you want. So for your succeeding doses, you can go ahead and increase your intake by another 1g to 2g. Keep gradually increasing your next doses until you reach your therapeutic threshold.

According to experts, sticking to your lower limit should showcase the more stimulating effects of a kratom strain. Taking a dose closer to your ceiling limit may produce more sedative effects.

Differences in growing conditions and environments are ultimately the cause for variations in kratom strains’ effects. Nevertheless, they’re all the same plant. So while there might be some distinctions, similarities exist as well.

If you enjoy Hulu, here are a few other kratom picks that might find a place in your stash:

Literally translated to ‘pimp grade’, Maeng Da is often recognized as one of the strongest standard strains on the market. This stuff induces a profound response from its users, which makes it a known territory for veteran kratom enthusiasts.

In terms of effects, Maeng Da provides energetic, mood-boosting, and discomfort relieving effects similar to those of Hulu. The main difference however is that Maeng Da tends to be slightly more aggressive, making it ideal for more experienced kratom users.

You can think of Borneo kratom as Hulu Kapuas’ more relaxed cousin. Offering similar effects in the energy department, Borneo helps its users achieve greater productivity throughout the duration of its effects. 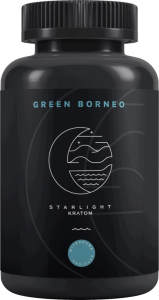 While it does have some mood uplifting effects, Borneo doesn’t resonate at such a high frequency the way that Hulu does. So while it might get you feeling motivated and happy, it probably won’t put you in the same ultra-upbeat mood that Hulu would.

At just the right dose, Malay can provide its user with benefits that elevate their mood and energy levels. Certain batches of Malay might even behave like Hulu Kapuas entirely, especially in that energy department.

But as you’ll probably notice, Malay’s other effects focus more on stress relief. So although it might not ease away physical discomfort, as well as Hulu, does, it works wonders to clear the mind of cognitive stress and disperse any mental clouding.